One of the most popular new features in AcclaimIP is our Patent Score, which we call the P-Score. P-Score ranks patents by various statistical metrics that contribute to their statistical quality.

Patents that rank high on the P-Score scale tend to be better patents, with a higher likelihood of being infringed, being used in a company’s products, or having current or future monetization potential.

Depending on how you define a “data point”, AcclaimIP uses from 30 to 30,000 data points to develop the P-Score for each patent. To simplify the scoring concept, the P-Score is a weighted average of three contributing component scores:

Patent scoring 88 and its component technology, legal and citation scores.

Each sub-score is calculated from a number of contributing factors, and each is included in the AcclaimIP interface so you can make better “at-a-glance” judgments on the statistical metrics that contributed to a patent’s score. 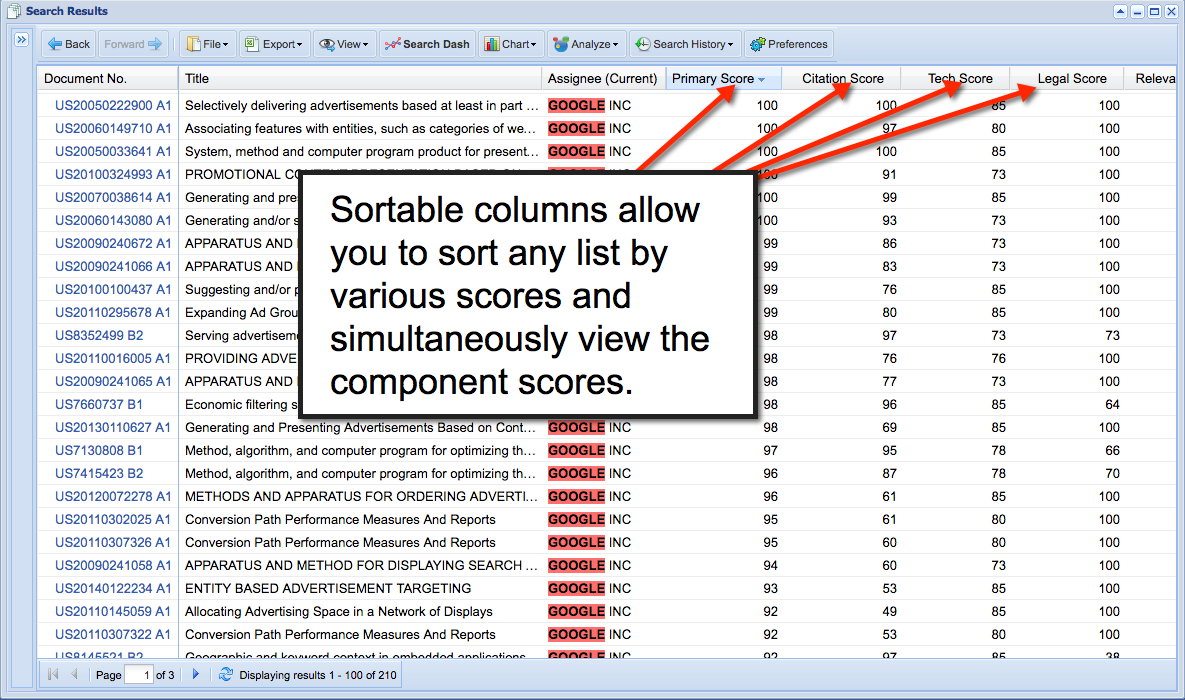 We experimented with several methods to normalize the scores, but I think the one we picked is the most intuitive—and most useful.

Scores are normalized from 1 to 100 corresponding to precise percentages. So if you have a patent that scores 100, you’ll know that it is a top 1%er. If your portfolio averages a 55, you’ll know that you are 5 points above the statistical average of exactly 50. This way there is little guesswork in how your patents and portfolios stack up compared to the general population of patents.

Each of the three component scores is also normalized to 100 using the same linear percentage method.

What Data Points Contribute to Scores?

Let’s consider the Citation Score. You can imagine that two patents with the same number of forward citations could be ranked quite differently. There are lots of ways to tease out what makes a quality citation profile, which includes far more than just raw citation counts. Some of these include:

The technology score, or T-Score, does not score a patent directly, but rather it scores the CPC classifications (technology classes) in which your patent is classified. We use statistics to determine which classes are strong and which are relatively weak. A strong classification is one that scores highly in each of the areas below:

The T-Score algorithm accounts for the hierarchical nature of the CPC class system, otherwise it would not work, since a parent class may have little activity when all the “action” is pushed down to its children classes.

If a patent is classified in a class that is growing, with a high maintenance rate, with lots of recorded transactions or company acquisitions, AcclaimIP assumes that it covers a strong technology, and it then impacts the technical component of the patent’s P-Score.

The legal component is composed of several metrics that are indicative of a patent’s strength including the following measurements:

What is a patent metric?

A patent metric is any quantitative data point (a number) associated with a patent. Metrics can relate to anything as long as it can be quantitatively measured.

I like to break up patent metrics into two categories:

Further metrics from a set of patents in the patent corpus at large can be measured and applied to a patent sharing characteristics of the set.

For example, allowance rates, maintenance rates, growth rates and transaction rates can all be applied to patent classifications. In turn, each patent can inherit some quantitative measure based on the classifications in which it was assigned.

How to Use and Interpret Patent Scoring Systems

Clearly the P-Score is not something that is pulled out of thin air, but rather a result of a careful study of the academic literature, and years of experimenting with regression testing to confirm the metrics are indicative of a patent’s quality.

Of course, there are outliers. A patent with characteristics of a quality patent can actually be useless, and conversely, a patent with poor quality metrics can be outstanding, but these are the exceptions and not the rule.

If you want 100% confidence that your scoring is accurate, you have to read every patent and file wrapper, and make judgments to the quality in context of the problem that the patent may help solve. There is no way around that.

Nonetheless, patent scoring systems are valuable, because they focus the researcher on those patents that are most likely to be useful or important to the searcher.

Scores also clue you in on what happened during prosecution. Let’s say you have a patent where the first independent claim was narrowed by 100 words. Immediately you should know that what the applicant filed and what was granted are quite different, and surely some investigation is required. Another example might be a patent that received a blind citation to your patent by an examiner making a 102-novelty argument. Clearly cases like these are great indicators of potential infringement. These important cases are reflected in the P-Score.

Personally, I like to expose all 4 scores in my search results grids. Let’s say I have a patent whose score profile looks like this:

Overall it gets a high score, but you can see the primary contribution is from the citation score. The legal component and technology component are actually below average.

If you investigate the citations further, you’ll notice that most of the citations are from Semiconductor Energy Lab via IDS citations. SEL also cites the application and not the patent even though the patent has been published well before most of the citing documents were filed. You have to wonder what is going on here. Even so, this patent is highly cited by other patents from examiners.

Each of the four scoring metrics can be queried using advanced syntax.  Each score has its own easy-to-remember field code:

Each field code supports a number from 1 to 100 or range queries.  For example:

Evolution of the Patent Scores

I’d like to conclude this article by letting you know that the scoring system is designed to be agile and improved as we learn more and get feedback from our users. Please weigh in, point out outliers, or suggest a new visualization, so we can continue to improve the scoring metrics and your reporting capabilities.